Burro, formerly known as Augean Robotics, is an autonomy company providing solutions for the agriculture industry. On September 28, 2021, the company announced it has raised a $10.9 million Series A from Toyota Ventures, S2G Ventures, and existing investors. The robotics company operates out of NextFab’s South Philadelphia location on 2025 Washington Ave. 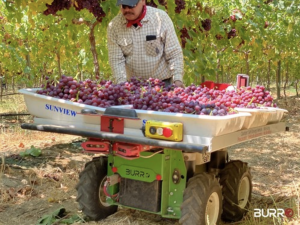 A Burro at work. Source: Burro

“Many autonomy companies beginning in agriculture have focused first on autonomous tractors, autonomous weeding, and harvesting, where they try to comprehensively automate incredibly hard technical tasks, and often struggle to scale into a large market – we’ve started instead with collaborative people-scale robots that help people by moving heavy things around,” said Charlie Andersen, CEO of Burro. “The beauty of this approach is that we can scale today around a ubiquitous pain point in the most labor-intensive areas of agriculture, while also allowing our platform to capture data and learn about many environments – providing the foundation for us to scale to countless other applications.”